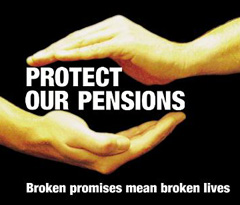 Critically for retired miners, as HuffPost reports, Murray Energy is the last large coal operator paying into the pension fund of the United Mine Workers of America. But through bankruptcy proceedings Murray Energy will very likely be able to shed much of its pension obligation, threatening a fund that is already on the brink of insolvency.

Bottom line: a million Americans could lose their pensions unless Congress acts.

The miners pension plan is in jeopardy because of coal companies’ improper use of bankruptcy laws to get rid of legal obligations to pay into the pension plan. Without those contributions, that plan will fail. And now, Murray Energy has become the eighth coal company to employ this tactic this year, putting the pension plan that thousands of retired miners rely on in danger of collapse. A pension is a promise, wages deferred for a lifetime of hard work in dangerous conditions.

And now, miners who have played by all the rules and are too old to play a different game are having the rules changed—and that’s unfair. If this can happen to miners, it can happen to you. This is a crisis not just for our coal communities, but for every American who dreams of retiring with security and dignity. Congress must step up and stop this injustice today, starting with passage of the Miners Pension Protection Act of 2019.