As Washington prepares to commemorate the 20th anniversary of the 1999 World Trade Organization protests in Seattle, a move is afoot in the other Washington to pass another “free trade” agreement that makes the same mistakes as its predecessors by putting corporations at the center of the deal, and not working people.

Last week, a group of Democrats attempted to pressure House leaders to bring President Trump’s U.S. Mexico Canada Agreement (USMCA), a deal intended to replace the failed NAFTA, up for a vote. While progress is being made to improve this agreement, the AFL-CIO’s position on the USMCA remains unchanged: Congress should not put the deal to a vote until the fixes America’s unions have insisted upon are incorporated into the final agreement. 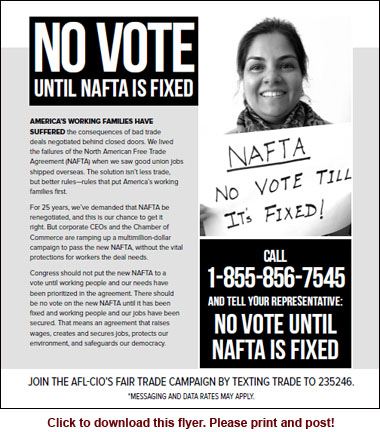 TAKE A STAND — It’s not clear whether any of Washington’s Democratic congressional delegation was among those pressing for a vote to pass this new NAFTA, but the AFL-CIO is urging all union members to call members of Congress at 1-855-856-7545 and tell them: No vote until NAFTA is fixed. (Download, print and share this flyer urging others to do the same.)

“Our allies on Capitol Hill understand that getting this done right is more important than getting it done fast,” said AFL-CIO President Trumka as the Trump White House and the U.S. Chamber of Commerce try to rush a vote on the new NAFTA. “So until the administration can show us in writing that the new NAFTA is truly enforceable with stronger labor standards, there is still more work to be done.”

Trumka is reportedly meeting with congressional Democrats today to make that clear.

BACKGROUND — Trade relationships can be an opportunity to strengthen democracy, stimulate economies and uplift the well-being of working people here and around the world. But, they can also be used as a way to harm and undermine us. For a generation, corporations have used trade deals to rig the rules of the economy in their favor, at the expense of working families. 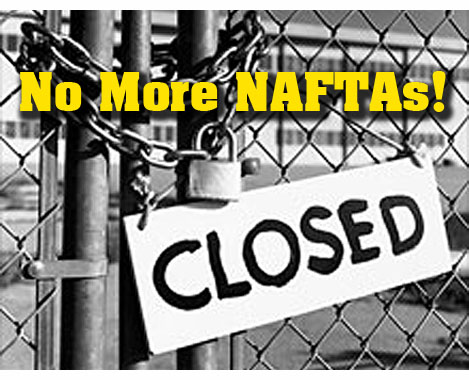 NAFTA isn’t broken. It’s done exactly what it was meant to do. It’s exploited workers in Mexico, and disrupted lives here in the United States. It’s taken money out of workers’ pockets and put it in the hands of a few billionaires.

So, the solution can’t be a new NAFTA. It can’t be a rebrand or a sliver of change. The only answer is to include a strong enforcement mechanism for raising wages and protecting the rights of working people.

This renegotiation process is an incredible opportunity. It’s a chance to secure that kind of change — to create trade policy that truly prioritizes working families. Unfortunately, that has not yet happened. As it stands, this agreement is nothing more than NAFTA with some pluses and minuses. But, there’s still a chance to make it work for working people. Here’s how that can happen:

This deal is incomplete. A vote would be premature. And any effort to force it through as is will be met by nationwide opposition from the labor movement.