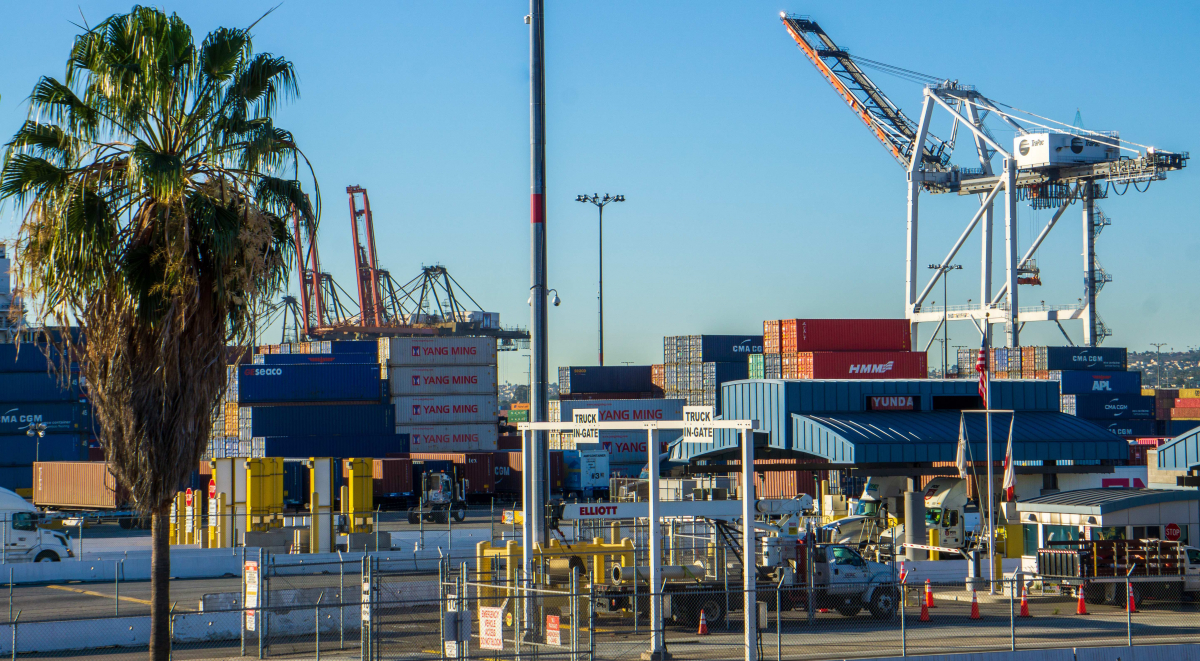 The ports of Los Angeles and Long Beach moved the equivalent of 10 million 20-foot containers in the first half of 2021—a record high. Photo: Daniel Melling / The Emmett Institute, CC BY-NC 2.0.

If you ordered a teddy bear or a designer picture frame as a holiday gift, you know that it likely took a lot longer to get here than in past years.

There have been problems getting things from point A to point B since the pandemic started. At one point in October, 77 percent of the world’s ports were experiencing long delays.

More than most Americans, Longshore Union (ILWU) members grasp what supply chain problems are and how they come about. Many come from multigenerational families of port workers who understand both their militant union’s storied history and its role in the global economy today.

ILWU members handle the containers that go into and out of the United States through nine West Coast ports. Containers are big metal boxes of standard sizes whose use since the 1950s has made transporting products by ship, rail, and truck much cheaper and faster.

For example, the ports of Los Angeles and Long Beach moved the equivalent of 10 million 20-foot containers in the first half of 2021—a record high. The two side-by-side ports handle about 31 percent of all seaborne consumer goods and commodities entering the U.S., largely from Asia. Together they are the ninth-biggest port in the world, in part because they are among the few able to welcome newer, much larger ships.

But despite the increased volume processed this year, it hasn’t been enough to handle the consumer demand for more products. At one point in November, upwards of 80 ships were waiting to unload outside the two ports, as the “just-in-time” system crumbled under the weight of its own contradictions.

China locked down manufacturing in early 2020, so shippers shut down their vessels for months. Then a surge in demand in the U.S.—also largely due to the pandemic—increased the quantity of goods demanded from Asia, changed the nature of those goods, and accelerated the shift to direct-to-consumer online purchasing.

“The supply chain’s predictive analytics were deeply flawed and unable to deal with a pandemic. For example, no one expected [so many] home office purchases,” said Dane Jones, Clerks’ Technology Coordinator for the ILWU’s Longshore Division.

By 2021, because of the enormous demand and the limited supply of ships, the price to ship goods across the ocean had skyrocketed. Another contributing factor: over the past decade the eight largest carrier companies had organized themselves into a cartel, which by 2018 controlled 80 percent of container shipping.

The cost of sending freight from Asia to the U.S. increased tenfold this past summer, and the freight carriers made out like bandits. Maersk, the largest shipping company, had its most profitable quarter in its century-long history: in the third quarter of 2021 alone its operating profits reached $5.9 billion.

The elevated shipping costs even affected U.S. agricultural exports. Whereas before, ocean carriers would take on American agricultural products to partially defray the costs of sending back empty containers to Asia, now they wanted to get those containers back as soon as possible. Containers were in short supply.

Also in short supply were truck drivers, truck chassis, warehouse space, and other links in the supply chain.

“There’s no excess capacity,” said Jones. “We have a logistics supply chain that was designed to give you exactly what you want, exactly when you want it”: just in time.

The supply chain problems we're all experiencing now are “the fault squarely of bosses and politicians, and over a long period of time,” said Zack Pattin, a longshore worker with ILWU Local 23.

From deregulating the trucking industry in 1980 to allowing a powerful shipping cartel to emerge even after the financial crisis, the ones who created this situation were those who stood to gain financially, ideologically, and politically from just-in-time production—not factory workers, port workers, truckers, or warehouse workers.

Nonetheless, when the supply chain started to break down, frontline workers got blamed.

ILWU members say the port terminal operators are drawing attention to the delays to cast longshore workers in a bad light ahead of contract negotiations next year.

“The foreign-flag steamship lines are going to exert all of the leverage that they can towards American workers to get the absolute best deal that they can in the upcoming negotiations,” said Seattle longshore worker Justin Hirsch, “and if that means going to sympathetic ears in the press to throw mud at us, they’ll do it with absolutely no hesitations.”

One central issue is the employers’ drive to replace workers with bots.

“L.A./Long Beach is a major battleground for automation,” said Local 23 member Brian Skiffington. At four automated terminals there, “instead of five or more trucks per gang, there are cab-less robot trucks and a single supervisor—a massive elimination of labor.”

Terminal operators—which are often partly or wholly owned by ocean carriers—want such practices extended across the West Coast ports. They lease the ports from the public entities that own them, usually cities or counties.

But a fight over automation in the 2022 contract doesn’t tell the whole story of the long-term challenges ILWU members face, said Peter Olney, retired organizing director at the union. The ILWU’s historical militancy has created a bastion of good union jobs at the ports, but the deregulation of trucking and the emergence of non-union warehouse work threaten those conditions. As a result, ILWU might end up on an island.

Conditions for port truck drivers deteriorated after the Carter administration’s 1980 Motor Carrier Act led to the de-unionization of their industry. Now they represent a largely unorganized and misclassified workforce, ripe for exploitation by the bosses—and to be turned against longshore workers.

“Our employers have P.R. people and this happens every time we have a contract [coming up],” Skiffington said.

The challenges that truckers and warehouse workers face are real. For example, drivers get paid by the load, so waiting hours or days for their truck to get loaded or unloaded can cost them a pretty penny.

What’s needed, Olney said, is another “March Inland”—the campaign in the 1930s when the ILWU organized workers in warehouses to make sure they could not be used to undermine longshore standards or supply scabs.

That, however, comes with its own set of challenges. Longshore work today is very different from warehouse and trucking work. It’s highly capital-intensive, says researcher Katy Fox-Hodess, whereas warehouse and trucking are labor-intensive. “There’s a reason that port crane operators have such high wages—they’re operating some of the biggest, most expensive equipment,” she said.

Whether or not ILWU—by itself or in partnership with other unions—will be able to organize the port logistics industry remains to be seen. But Pattin is undeterred by the challenges.

“The waterfront attracts people from every walk of the life you could imagine,” he said. “And the union brings them together, people you’d never see call each other ‘sister’ and ‘brother’ anywhere else.”